A Rare Opportunity at Fort DuPont

From the 19th century inception of Fort DuPont, this community served as a bustling military site on the majestic Delaware River. Now we have the rare opportunity of creating a new lifestyle-based community that builds on its historical roots, designed around the water and great outdoors. In addition to the restoration of historic homes and commercial buildings, Fort Dupont will include a marina, restaurants, new homes, retail stores, conference center, and office space all on the waterfront.  See the master plan here. Once a military installation, Fort Dupont is now being integrated into a place to call home for people looking to connect with nature, history, and community. 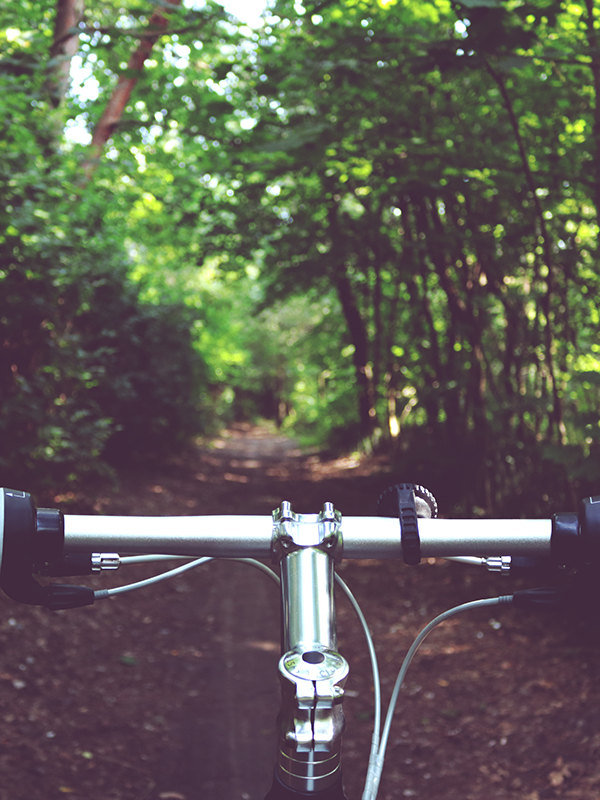 When Delaware City was planned in 1828 the promoters pictured a place as large as Wilmington or Philadelphia. Their plat shows a grid of streets on both sides of the original canal, which ran from southwest to northeast and entered the river at Newbold’s Landing. The canal was busy, and as time went on the city too was busy. It never became the coal port its backers hoped for. Eventually, the canal became the town boundary. On the southern side for another 70 years, there were farms and orchards.

The Branch Canal still follows the original route, but instead of a city on its south bank, in time the land became a military base. Fort DuPont was built on a farm that Clement Reeves sold to the government. It was commissioned in 1898 as part of the nation’s coastal defense system. In 1947 it was turned over to the state.

Today, nearly 200 years later, historic Fort DuPont is poised to be transformed into a model “live-work-learn-play and visit” community with connections to local and regional recreation. Part of the original fort is now a state park. The fort’s historic buildings, listed on the National Register of Historic Places, will be rehabilitated and reused. Vacant land is ready for new development opportunities and the vibrant mixed-use community envisioned in the master plan will reinforce Delaware City as a regional destination.

Named after Rear Adm. Samuel Francis Du Pont, the former military post is situated on the Reedy Point tract, land originally granted to Henry Ward in 1675. A “proposed fort” was planned in 1819, which only appeared on Delaware River charts. Fort DuPont originated during the Civil War as a heavily armed earthwork fortification.

In 1864, Sgt Bishop Crumrine wrote, “these guns command the channel and could blow to atoms any vessel rash enough to attempt to pass.” In the decades to follow, “the battery at Delaware City” was gradually modernized into a formidable military post remaining active through World War II. Declared surplus, the site reopened in 1948 as the Governor Bacon Health Center. By 1996, over three-hundred acres were reestablished at Fort DuPont State Park.

While construction took place on the early 19th-century version of Fort Delaware,  the Board of Engineers made plans also to fortify the Delaware mainland. Their 1821 operations summary estimated that a construction cost of $347,257. Their estimate was nearly $100,000 more than the Fort Delaware quote, due to the works required to secure the approaches on the land front. But construction at the mainland site did not take place for another forty years. 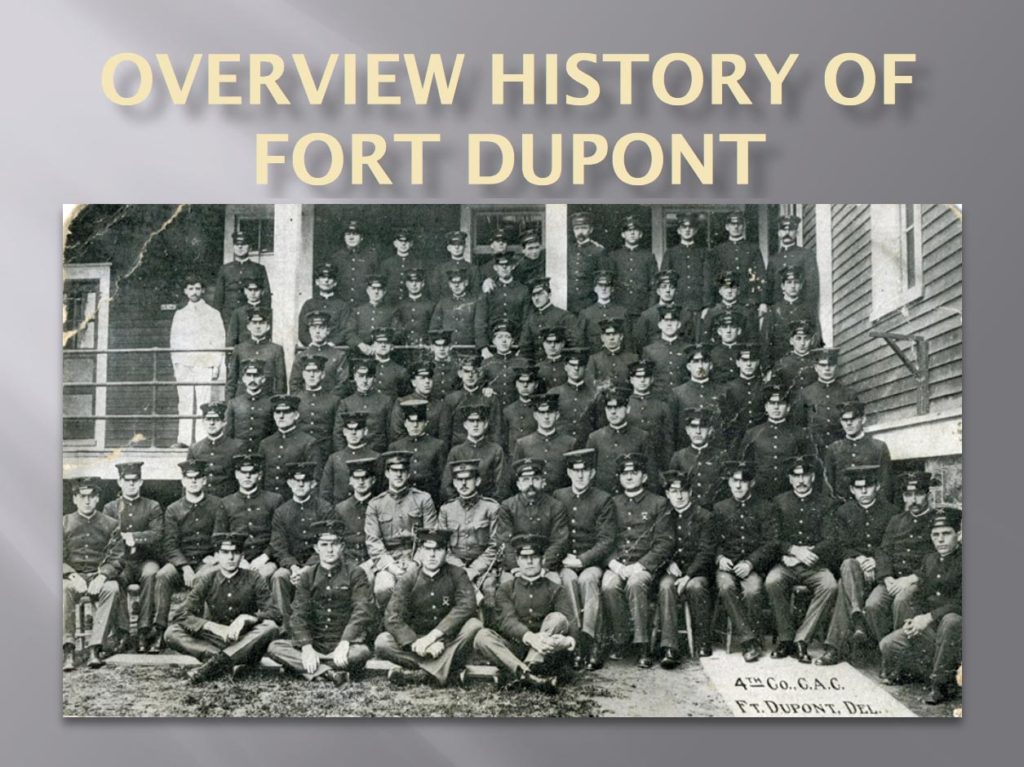 In 1864, Lt. Col. Henry Brewerton’s plans for a Ten Gun Battery became a reality.  It was a pentagonal redoubt-style structure almost 250 feet in width. The fortification included a heavily reinforced magazine, parade ground, kitchen, and quarters.  The earthen and frame construction complete with trench and palisade was more resilient to the new rifled cannon fire than its masonry predecessors. Six-ten inch Rodman guns and four fifteen-inch guns were installed, some of which were capable of firing a 300-pound projectile over 2.5 miles.

Sgt. Bishop Crumrine, posted at Fort Delaware with the Pittsburgh Heavy Artillery, was reassigned to the mainland to establish a garrison there.  Letters to his brother detail life at “Fort Reynolds” or “The Fort Across.”  Crumrine wrote,

“You can hardly imagine how busy I have been since I have been at this place and how nice I have made the place look. Six great large guns mounted and painted off nice, the grass growing nice and green on the parapet and magazine… The quarters all fixed up nice… large stove in the kitchen, great pile of coal in the coal house, three months rations in the storehouse for 50 men…. if you remember that I had to haul all the gun Carriages all the way from the wharf by hand, which is over a quarter of a mile. And that the guns we mounted on them weighed from 7 to 25 tons you can nearly imagine how busy I have been…”

By 1870, the battery was abandoned for a new twenty-gun emplacement. But the plans never saw completion, and by the turn of the century, a new generation of fortification was imminent.

While the time between World War I and World War II saw a decrease in active military preparation, Fort DuPont still played a critical role in the coastal defense.  The new age of air warfare changed the face of coastal artillery, with defenses of the Delaware Bay moving south and with a greater range of fire. The only remaining armament at Fort DuPont consisted of eight mortars and the 3-inch guns of Battery Elder. The primary defense of Delaware now comprised of two pairs of 12-inch guns on long-range carriages at Fort Saulsbury in Milford. Fort DuPont’s role was that of a secondary line of defense.

The post took shape as a location for training army engineers. The 1st Engineer Regiment arrived in 1922 and was led by Col. Ulysses S. Grant III during the early 1930’s. Training included reserve engineer units as well as the Citizens Military Training Camps.  The community buzzed with activity despite the Depression; a War Department Theater was constructed, and officer houses weighing as much as 240 tons were floated over from Fort Mott via pontoon and as shown on the following 1931 movie clip.

Neil Lewis, son of Staff Sergeant Fay G. Lewis, recalled Depression times at the post growing up.  Not able to visit the cinema much due to the cost, he and his siblings were often sent to the commissary to purchase day-old bread for two cents. This was a significant savings of one cent over the freshly baked bread.  His memories include going barefoot in the summer, flying kites at the post golf course, football games on the parade ground, and clambering over coast artillery guns.

As the 1930’s drew to a close, life seemed uneventful at Fort DuPont. Doug Shreve, son of Col. Arthur L. Shreve, recalled the benefits of being the son of a high-ranking officer.  Ironically, Doug’s great-grandfather, Thomas Jefferson Shreve, had been a Civil War prisoner at Fort Delaware. Wearing an officer’s cap from the post tailor shop, the boy enjoyed donuts from the post bakery and pausing at the flagpole in the evening as colors were lowered. His Uncle Bill also posted to Fort DuPont, described sleepy Delaware City as “the only graveyard he had ever seen with a traffic signal in the middle of it.”

Then a December day in 1941 changed life overnight.  The post-football team was playing an away game in New Jersey when news came of Pearl Harbor.  The devastating news put all posts on alert, and the security of the Delaware Bay took on renewed importance. By 1943, Forts DuPont, Delaware, and Mott were formally eliminated from the harbor defenses, with that role now going to Fort Miles in southern Delaware.  Fort DuPont’s role changed not only physically, but also in purpose. Large numbers of temporary, or ‘mobilization’ buildings were quickly erected. Fort DuPont was now a critical training post for skills including combat, communication, chemical warfare, and even baking.

The post also assumed a new role as a prisoner of war camp. Nearly 3,000 captured German soldiers from Rommel’s Afrika Korps campaign as well as Italian soldiers were imprisoned in repurposed buildings, where they assisted the American war effort in the farm fields and on the post. Kurt Henkel, one of the German prisoners, said in a 2007 letter that “I like to remember those days since I was treated well.  I was lucky to be taken a U.S. prisoner of war and have thus been able to survive the war alive.” Col. Shreve, once commandant at Fort DuPont, was not so fortunate. Sent to war in the Philippines, he survived the Bataan Death March and four years as a Japanese prisoner.

In the war’s aftermath, Fort DuPont was declared surplus property and turned over to the state. The Governor Bacon Health Center was established in 1948 by the state, utilizing the brick barracks buildings as well as some of the houses and service buildings.  Most of the frame mobilization buildings that were hastily constructed in wartime were torn down. The 285 total buildings that existed in 1943 have now dwindled to less than 80.

In its new role as a hospital campus, the post still provided great memories for Delaware City. Martha Bennett fondly remembered swimming in the pool and going to the theater.  Kids in the 1970’s visited Happy Hall, the roller rink that has since been demolished. Chris McKinley talked fondly of his childhood adventures, playing war and donning old military coats found in refuse piles near the river.

About ten years after the Health Center took up residence in the post, the old military post began to draw attention from concerned citizens. Newspaperman Bill Frank brought it to the limelight with newspaper articles touting its history.

In June of 1957, he ventured out to the site with a photographer, to find “three youngsters, armed with wooden guns in their game of soldier, keep(ing) the guard over the deserted gun emplacements.”  Frank’s advocacy paid off, as others began to take an interest.

In the 1980’s the Delaware National Guard constructed the MG Joseph J. Scannell Armory on site of the old POW camp, once again tying it to military service.  The building was a home station to the 736th Supply and Service Battalion, and then to the 153rd Military Police Company.

Leah Rodel was one of those dedicated advocates who saw the value of the beautiful river site. At her urging, in 1992 part of the post was transferred to the Delaware Division of Natural Resources and Environmental Control, becoming Fort DuPont State Park. Four years later, the park was expanded to almost twice its size.

Citizens continue to advocate for adaptive reuse of historic Fort DuPont.  Efforts have led to the creation of the Fort DuPont Redevelopment and Preservation Corporation, which will spur a coordinated effort to preserve Fort DuPont’s historical legacy. 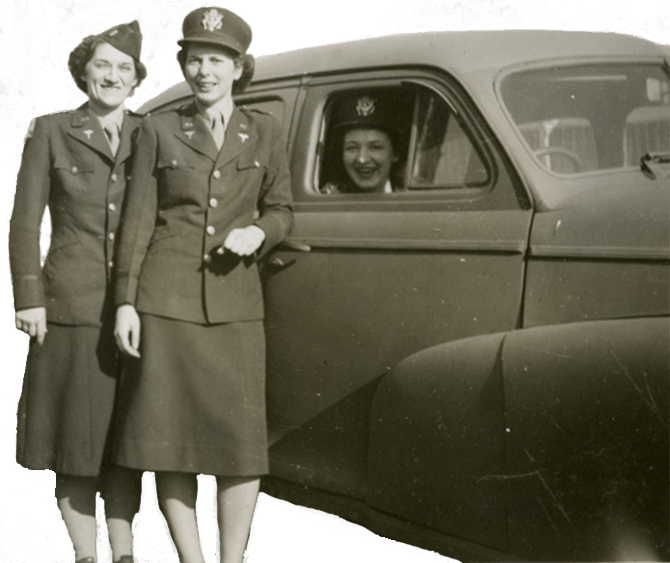 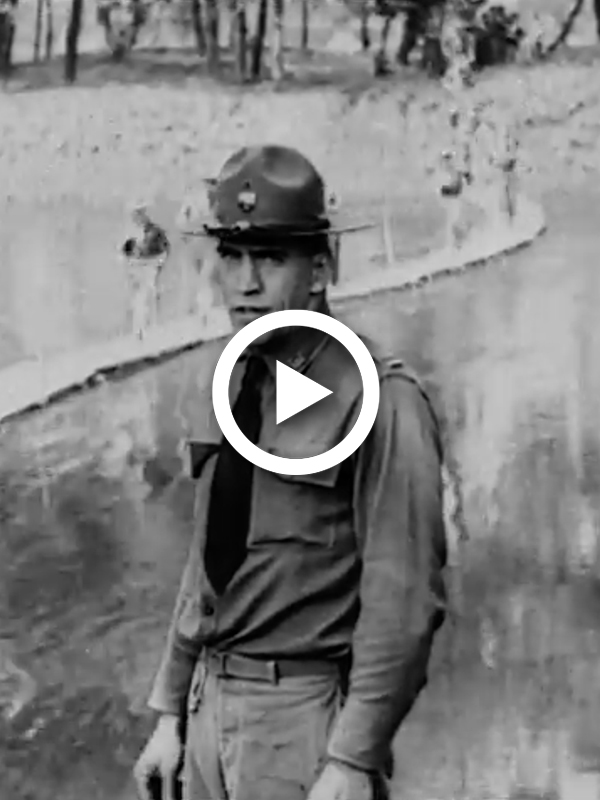 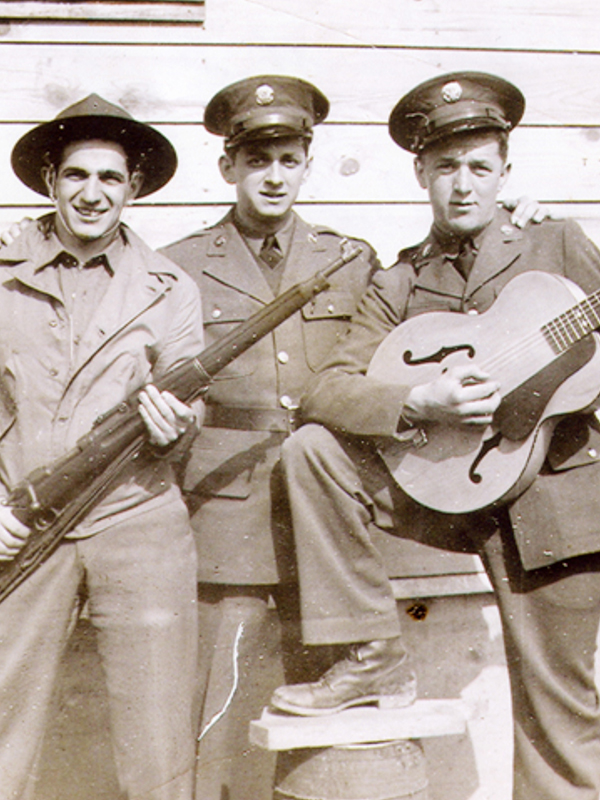 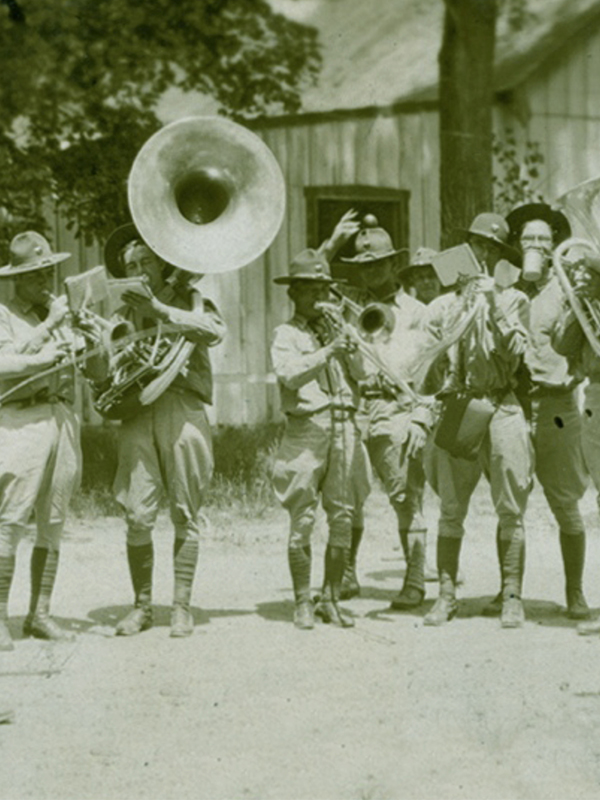 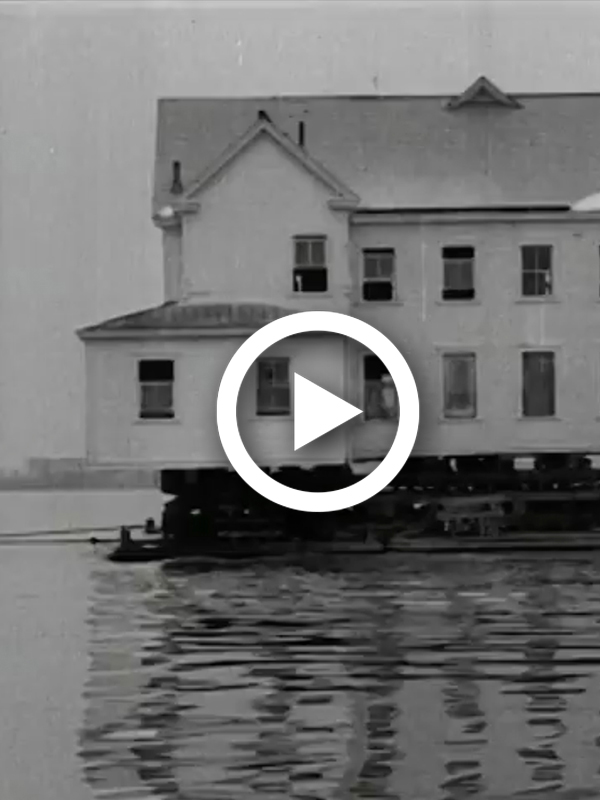 The Corporation has been charged with management, preservation and development of the complex and is governed by an 11 member Board of Directors, seven of which are appointed by the Governor and four by the Mayor of Delaware City.  An Executive Director reports to the Board and oversees the Corporation’s activities. The Board of Directors meets the second Wednesday of each month at the Grass Dale Center at the Fort DuPont/Fort Delaware State Park offices, on Polktown Place. 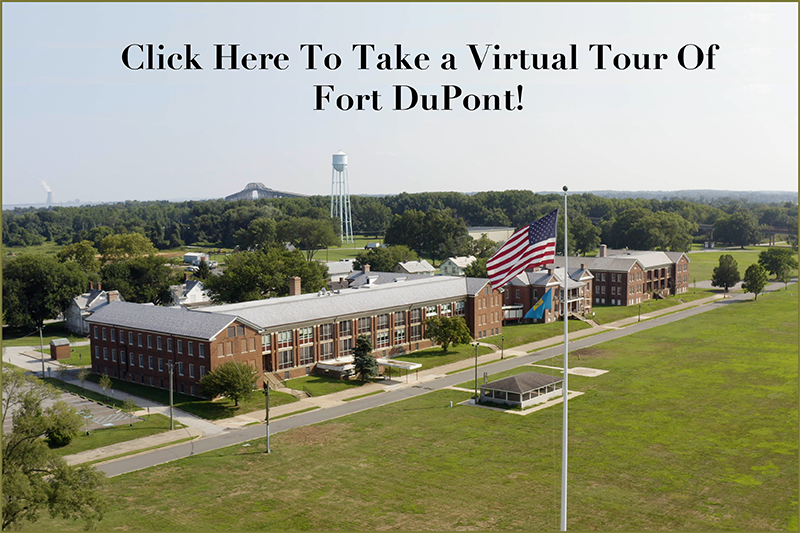 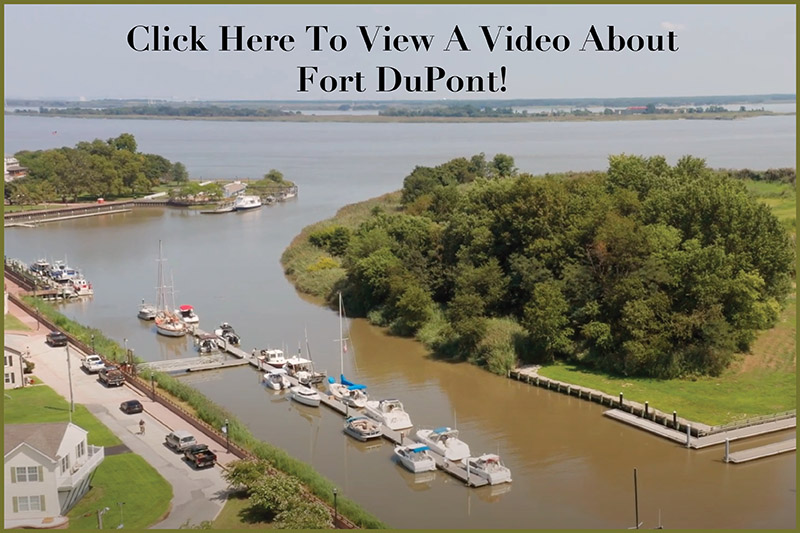 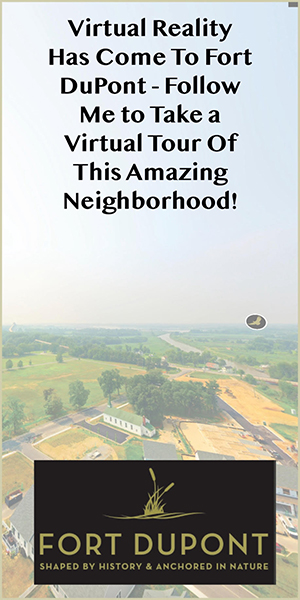 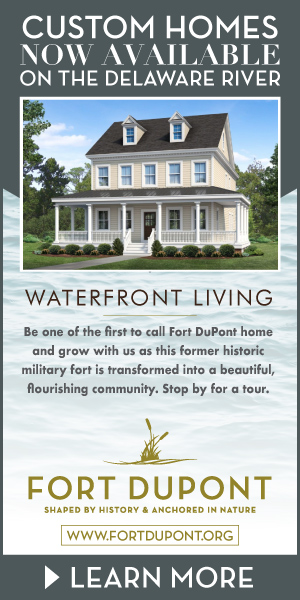