From the Past: How it all Started 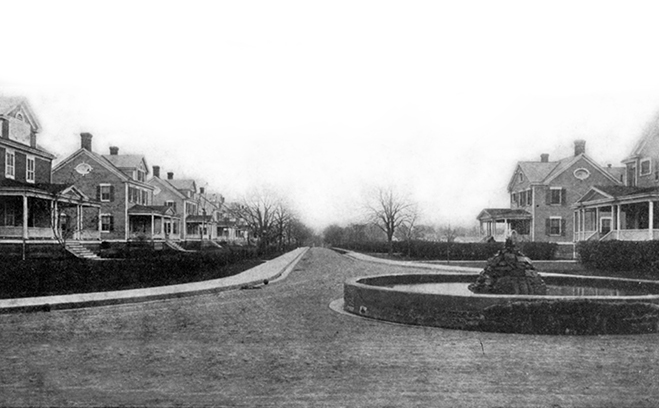 As far back as the Revolutionary War, the area we know today as Delaware City was known as Reeden Point. When Delaware City was planned in 1828 the promoters were planning for a large city like Wilmington or Philadelphia. The original plan shows a grid of streets on both sides of the original Chesapeake and Delaware Canal. The Canal and newly formed city were busy, but never developed into a large commercial center as originally planned. Eventually, the canal became the town’s southern boundary with many acres of farms, orchards and marshland on the other side of the Canal.

The area around Delaware City was recognized as an important site for protecting shipping on the Delaware River and defending Philadelphia which is just 40 miles up the river. During the Revolutionary War, a local innkeeper and volunteer soldier, Captain Aiken, organized a group of volunteers to defend the site from British attack. While there were no attacks by the British during the Revolutionary War, plans to establish a permanent fortification were started during the War of 1812. This was a slow process, with the first fortifications not completed until the 1860s, when the Ten Gun Battery was built and the fortification on the Delaware River was given the name of Fort Reynolds.

Defending the Delaware River
The federal government allocated funds for the construction of a new fort on the Delaware shore opposite Fort Delaware which would augment the defensive capacity of Fort Mott, which is located across the River in New Jersey. While the newly funded fort and its expanded armaments were being built, Fort Delaware, located on Pea Patch Island, was in full service during the Civil war and housed may captured Confederate prisoners. A Twenty Gun Battery was designed. constructed and operational by the 1870s. It housed both heavy guns and coast defense mortars but was not fully armed. A system of underwater mines that were strategically located in the Delaware River and operated by a series of cables located in a control room at Fort Reynolds was also added at this time.

Over the years, the US coastal defensive fortification have been reviewed by orders of the President to determine their effectiveness. In 1885 US President Grover Cleveland appointed a joint Army, Navy and civilian board, headed by Secretary of War William Endicott, known as the Board of Fortification or the Endicott Board. The findings were contained in a 1886 report and highlighted a grim picture of neglect of America’s coast defenses. A massive construction program for a series of new forts and fort improvements at 29 locations on the US coast, including Fort Reynolds, was recommended. The construction program took place between 1885 and 1905 and is known as the Endicott Period fortifications.

Fort DuPont became the headquarters for the three-fort complex, which included Fort Delaware and Fort Mott, and had more soldiers, barracks and administrative buildings than the other two forts. In 1907 the three forts were designated as coast artillery companies under the U.S. Army Coast Artillery Corps.

Who is Fort DuPont Named After?
Fort DuPont is named after Samuel Francis Du Pont, who was born on September 27, 1803 and died on June 23, 1865. His uncle was Eleuthère Irénée du Pont, the founder of the DuPont Company. Samuel DuPont grew up on the family estate known as Louviers, located on the Brandywine Creek, just north of Wilmington, DE. He enlisted in the US Navy at the age of 13 and rose to the rank of rear admiral. During his long career in the Navy, he served in in the Mexican–American War and was instrumental in capturing the city of San Diego in 1846 which was held by the Mexicans. This led to his appointment to be the commander of the California naval blockade. Through the 1850s, he promoted engineering studies at the United States Naval Academy which supported a more mobile and aggressive operations. In the American Civil War, he played a major role in developing the Union plans to use naval blockades against the Confederacy.

In 1877 to recognize his service, the US Congress commissioned a sculpture of him to be placed in Pacific Circle in Washington. A bronze sculpture was dedicated on December 20, 1884, and the traffic circle was renamed Dupont Circle. The circle still bears his name, but the statue was moved to Rockford Park in Wilmington. In addition, the name of Fort Reynolds was officially changed to Fort DuPont on July 22, 1899, by Army General Orders, No. 134, officially designated the “battery at Delaware City” as Fort DuPont, named in honor of Rear Adm. Samuel Francis Du Pont.

Fort DuPont at War
During World War I, Fort DuPont continued to play a role in coastal defense but many of the armaments were relocated. With the development of aircraft and significant improvements to the armaments on naval ships, meant that the armaments at Fort DuPont and Fort Mott were no longer effective against an enemy ship. The role of Fort DuPont changed from defender to trainer as the Fort was taking a leading role in training local draftees and deploying artillery units.

World War II further transformed Fort DuPont and its focus was preparing troops for global war by providing training to the soldiers stationed there in the fields of: communications, chemical warfare, combat tactics and the use of weapons. Fort DuPont also operated a prisoner-of-war camp for captured German soldiers and sailors.

During the war, roughly 3,000 German POWs were housed at Fort DuPont. These POWs included crew members of the submarine U-858 that surrendered off the coast of Lewes in May 1945. POWs worked as dishwashers, waiters, grocers, butchers, and other support roles on post as well as working on other local installations. Some of the German POWs even repaired sections of the boardwalk for the city of Rehoboth Beach.

Post Military Use for Fort DuPont
As World War II came to an end, there were about 300 buildings and structures lining the streets of Fort DuPont. In 1946, Fort DuPont was declared surplus and the State of Delaware developed plans for the Governor Walter W. Bacon Health Center. At that time, many of the buildings were repurposed and a number were torn down. The Governor Bacon Health Center operated from 1948 to 1984.

In 1992 a portion of the site was designated as Fort DuPont State Park, which became Delaware’s 13th state park. In 1999 the site was officially designated the Fort DuPont Historic District after it was listed in the National Register of Historic Places. To ensure the preservation of Fort Dupont and its place in history and provide significant opportunities redevelopment opportunities.

By 2011 there were less than 80 historic buildings and structures remaining on the site. Steps needed to be taken to further preserve the remaining buildings so in 2013, the Department of Natural Resources and Environmental Control, in collaboration with Delaware City, conducted a planning process to revitalize the Historic Fort DuPont Complex into a vibrant mixed-use community, fully integrated with adjacent Delaware City. The Fort DuPont Redevelopment and Preservation Corporation (FDRDC) was created July 23rd, 2014 when former Governor Jack Markell signed House Bill 310 into law.

The work of the Fort DuPont Redevelopment and Preservation Corporation is ongoing and will be highlighted in future editions of this newsletter.