Welcome to a community blessed with a rich history and architectural heritage still evident in the homes and buildings along the wide tree-lined streets of Delaware City. Structures date back to the town’s earliest days in the 1820’s and help tell the story of its economic development. The Delaware City Historic District is one of the largest in the State of Delaware with more than 250 contributing structures.

Delaware City traces its origins to 1801 when the Newbold family from New Jersey purchased a tract of land that became known as Newbold’s Landing. The Newbolds drew plans for the town in 1826, with the expectation that it would eventually grow to rival Philadelphia as a Delaware River port and commercial center. Its location at the eastern terminus of the Chesapeake and Delaware Canal in 1829 caused Delaware City to become both an operating base and a way station for a number of significant shipping-related activities.

A peach boom during the period 1840-1880 that made Delaware City famous for popularizing peaches nationwide was started by Major Philip Reybold and his sons, who had over 110,000 peach trees by 1845. Peaches shipped from the Major’s Wharf in Delaware City reached many ports from New York to Baltimore.

Fish caught by Delaware City fishermen were processed and shipped from the town. Herring, shad and sturgeon were the main catch, with the sturgeon roe shipped to Germany and Russia to be packaged and marketed as caviar. Hunting and muskrat trapping in the nearby marshes also provided a livelihood for the residents.

Other small industries included the blacksmith shop, a carriage shop, a grist mill, a sheet metal factory, a chicken incubator factory and a mincemeat factory. Some of these were located in the area of the railroad station of the Delaware and Pennsylvania Railroad, which opened a line into Delaware City in the early 1870’s. Twentieth-century industry arrived in the 1950’s and 1960’s with the construction of the nearby industrial complex.

A walk through Delaware City’s streets allows you to view some of the best examples of the important architectural styles beginning with the Federal style of the 1820’s and Delaware’s Italianate “Peach House” buildings of the 1850’s. The styles continue through the catalog mail order homes of the 1920’s. Each of these styles represents an important period in the town’s prosperity.

Delaware City is a quaint riverfront community proud of its rich history and excited about the future. Located on the Delaware River in New Castle County, Delaware, Delaware City is the gateway to many natural and historic treasures, such as the Delaware Estuary marshes, the Chesapeake & Delaware Canal, Fort Delaware and Fort DuPont. 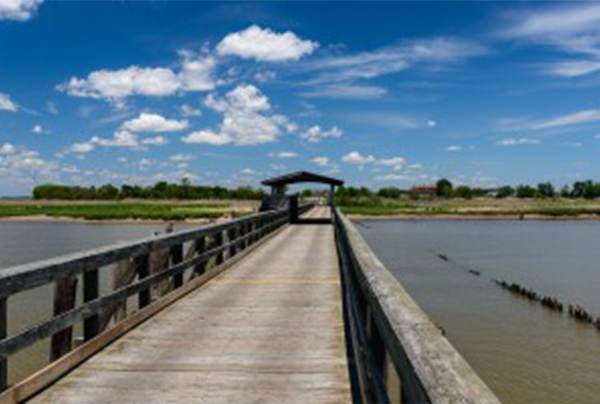 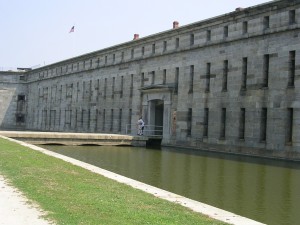 Fort Delaware, the Union fortress dating back to 1859, once housed Confederate prisoners of war. It was originally built to protect the ports of Wilmington and Philadelphia.

Visitors take a ½ -mile ferry ride from Delaware City to Pea Patch Island. A jitney provides transport from the island dock to the granite and brick fortress. Here, costumed interpreters take you back to the summer of 1864.

Fill your day with hands-on history. Help the blacksmith hammer out new parts for a cannon or work with the laundress. Be on hand when the 8-inch Columbiad gun fires a live gunpowder charge! See a replica of Pea Patch Island as it appeared in 1864 and artifacts from the Island’s past.

Make a day of it – there is a food concession stand on the island. And if you like, you can bring a picnic lunch to enjoy in our picnic area – tables and grills are provided.

Pea Patch Island, an oasis for history and nature lovers

Battery Park in Delaware City, on the river at the head of Clinton Street, is the jumping-off point for the ferry to Pea Patch Island and Fort Delaware State Park. The island fort was built to defend Philadelphia. In the Civil War, it was a prison camp that swelled to the size of a small city.

A short trip from Battery Park on the Three Forts Ferry will bring you to Pea Patch Island. While Civil War buffs will find exactly what they’re looking for within the historic walls of Fort Delaware, nature lovers will be just as pleased with the bird sanctuary at the north end of the island.

Recognized by the Audubon Society as a bird sanctuary of “continental significance,” this oasis of natural beauty is home to the largest heronry of mixed species on the East Coast. Nine species of wading birds can be found here including the Great Blue Heron, Great Egret, Little Blue Heron, Snowy Egret, Cattle Egret, Yellow-crowned Night-Heron, Black-crowned Night-Heron, Glossy Ibis and Tri-colored Heron.

There are tidal creeks within extensive tidal marsh areas on the island and large areas of coastal plain woodlands including stands of tall trees and shrub-dominated patches. There is a nature trail and an observation tower for viewing the heronry.

The Grass Dale area is a unique natural area that is a part of Fort DuPont State Park. Six major habitat types are found within a 100-yard radius including woods, tidal marsh, freshwater pond, hedgerows, meadow, and scrub. These habitats are attractive to a diversity of wildlife. The catalog of flora and fauna now stands at 134 birds, 84 plants, 47 insects, 16 mammals, 9 amphibians, 1 minnow and 1 crustacean species (DE Audubon 2002). The meadow areas of Grass Dale provide habitat potential for many birds including grassland species. Grass Dale wetland areas include extensive tidal marsh and a freshwater pond.

This area is an undeveloped city owned parcel that contains extensive tidal marsh area, scrub edge habitat and some coastal woodland fringe. This area is predominantly a complex of tidal marsh and open water and has been observed to be used as foraging areas for long-legged wading birds including great egrets.

This section of waterway and shoreline occurs from Fort DuPont northward to the Valero refinery area. The River is a major fish migration and habitat area. The River corridor is also used as a bird migration route, foraging areas for birds that consume fish and it also provides resting and roosting area for waterfowl and other water birds. The shoreline area includes tidal fringe marshes that provide erosion protection, water quality enhancement and habitat for wildlife foraging and cover.

The Gunning Bedford School site includes fields, scrub edge and coastal plain forests. The forest areas are part of the extensive riparian corridor of Dragon Run providing a wildlife movement and habitat corridor, supporting native plant community diversity and protecting water quality of the wetlands and stream channels. There has been high bird species diversity observed in this area and the school site is part of the Christmas Bird Count program that annually surveys designated sites for winter bird diversity.

The river edge along Fort DuPont contains a variety of coastal habitats and plant community types including tidal marshes (low and high), meadows, scrub and deciduous forest. This is an area that is known by birders for having a high diversity of water birds and land birds that can be viewed at different times including seasonal variation during migration periods.

Deposits from the dredging of the C&D Canal have been placed in dredge material spoil piles along the Canal. The deposits are from the Mount Laurel Formation which includes material deposited during the late Cretaceous Period approximately 65 to 85 million years ago. Fossils found in the formation include Beleminites, Mosasaurs, sharks and dinosaurs (Fossilguy 2004). Areas identified for viewing fossils occur in deposits located near the base of the Reedy Point Bridge immediately south of Delaware City.

For more information on Delaware City, go to their official website: https://delawarecity.delaware.gov/